Unforgettable make believe … a real life based on lies

If I live to be a-hundred-and-one, I’ll never understand …

Your words. They slip easily into my mouth when I think about your life. My bit part in it. You won’t see a-hundred-and-one now of course. It’s your birthday this week. You’d have been sixty-two. I like to think you were honest about that much at least. Although there’s still the smallest frisson of surprise when anything you told me turns out to have been the truth.

Once upon a time. That’s how all the best make believe begins, isn’t it? You sent me a CD. Falling in Love. God alone knows where you got it. Or why. Most of it’s crap. Your letter said. With all the flourish of a true romantic. You weren’t wrong. Just listen to track 7. I did as I was told. Nat King Cole. Unforgettable. That’s what you are.

Let me go back to that longest summer. Pick a day. Or maybe blend a few. They all roll into one anyhow. The bin men wake me. It’s too early for you. I’ve never quite grown used to the hours you choose to keep. To get up without you is more than my life’s worth. I lie in wait. Watching the rise and fall of your chest. I’ve got the formula. I roll over as you begin to stir. Greet you with a kiss. An enchanted prince. Thus I can at least postpone the moment when you turn into a frog.

The sun streams through the window. Breakfast in the garden. Kippers. Scrambled eggs. You actually make the best eggs ever. Me? I tread on eggs. One foot wrong, it all goes into free fall. Today the conversation bubbles. I feel peaceful. Safe. Grateful for the moment. You slather your toast with butter. All’s well with the world. The guy over the back’s out with his crossbow. The target hanging on that flimsy net above the wall. We speculate on what’ll happen when he misses.

It’s Thursday. Pay day. We head out to the Mall. You love shopping. Spending money makes you magical. In control. Even though you haven’t earned a penny of it. It’s that book that triggers you. In the middle of W H Smith. Last week you couldn’t wait to buy it. Now it unaccountably offends your sensibilities. We walk home in icy silence. Your fingers interlaced with mine. My fingertips turning blue. Once home, we dig in at opposite ends of the red corduroy sofa. I knit. You sulk. The atmosphere thickens. I count stitches. Recite verses in my head. You brood. Rumble.

Your prowess in verbal violence renders physical superfluous. After an hour or so you’re running out of steam though. It’s then I realise you’re ranting about breaking wind. My lip twitches. Even you must know that’s just absurd.

Would you fart in front of your friends?

That vein in your forehead throbs. I bite the errant lip. God knows what’ll happen if I laugh.

Would you fart in front of God?

You thunder. Cecil B DeMille. I lose it. Look straight at you. Pure disbelief. We collapse together in the middle of the sofa. Crying with laughter. Five years on, and you’re nearing the end of the final bender. Necking neat vodka. Three bottles a day. We still recall that afternoon and smile. On the days you can remember who I am.

We were well into our fifties when we met. You wrote me poems. Taught me how to draw. You were the only person ever to piggy-back me to the corner shop. Propose to me on one knee in Tesco’s. Run amok with me through fresh-fallen snow. With two carrier bags of shopping. We invented games. Created our own private bubble of make believe. The bipedical flying slug? The plummeting vole? Who on earth else could have come up with them? Your child touched the child in me, and she responded. For better. For worse. The bubble always burst.

A Friday night. A month on. Give or take. You disappear. A string of incoherent text messages later I find you on the pavement round the corner. Some students have called an ambulance. You’re refusing to get into it. My brother helps me carry you home in the end. You throw up on the red corduroy sofa. In the morning you’re dead to the world. I let myself out of the house. Walk to the corner shop. Blinking in the sunlight. Like a freed prisoner. When I get back you’ve wet yourself. And the sofa. A week later you lock me out of the house. Everything I own is in that house. For the next two months you trash the place with every drunk in town. When the landlord finally evicts you I clear the debris. The only things missing are a silver earring and a Nina Simone CD.

Seven years. I doubt we were together more than six months of it. You made up stories. Twisted words. Abused me without mercy. Accorded less respect to me than to a can of cheap lager. I made a lifestyle out of leaving. Fled half way across the country. Then invited you to join me. You delivered your final coup de grace three months before the end. I’d moved heaven and earth to get you talking to your sister. She came to see you. The story she related to me afterwards was strangely like the lies you used to tell about your ex. She banned me from your bedside in your final illness. Forgot to tell me. I’d been to see you twice before I found out.

She had the grace to phone me when you went. I knew already. How could I not? I walked into the night with headphones. The world all blurred with tears. From the crest of the flyover I looked out at the lights of the city where we first met. The songs you’d loved drowning the drone of the motorway below. I’d long ago accepted that we couldn’t be together. Now I’d never get to hear your growl again. Laugh with you. Talk endlessly on the phone. About everything. And nothing.

Your funeral would have been so different if they’d asked me. But they didn’t. After all, you’d charmed them all by then. Made believe I was the villain of the piece. Thus were you sanitised. Sanctified. Made respectable. Something you never quite achieved in life. You’d have been happy with that. It was what you’d always wanted.

Your drinking buddy stood up at the crematorium. Spoke about your loyalty. Pat, you used to call him. It’s not his name of course. He had more courage than I did in that crowd. Admittedly a bit of it was Dutch. I was chatting to him just this morning in the café where I work. He thinks a lot of you. Quite rightly so. And who am I to burst his bubble? To tell him that one of the things he respects about you most is pure make believe?

Sweet dreams. Sleep peacefully. I loved you. That wasn’t make believe. Even though you always thought it was.

And now just one last thing … Breast of lamb … I think I won that round. 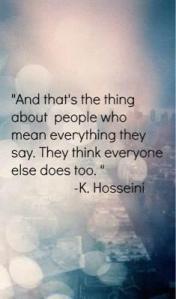